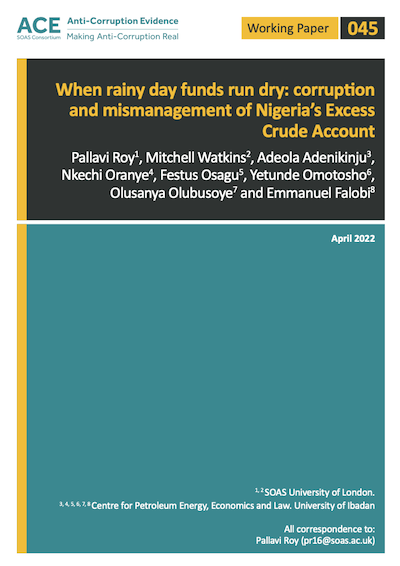 Developing countries dependent on natural resource revenues to finance their budgets are characteristically prone to the boom-and-bust economic cycles driven by volatility in commodity markets. In order to insulate themselves from global shocks, many natural resource-dependent countries have set up sovereign wealth funds. These are investment vehicles intended to provide stability against economic shocks by covering unexpected budget deficits, allocating resource revenues to specific expenditure items, or saving for future generations.

This study examines sources of corruption in Nigeria’s largest sovereign wealth fund, the Excess Crude Account (ECA). The ECA was established in 2004 to save excess oil revenues against budget shortfalls due to the volatile crude oil prices. At its height, the ECA accumulated almost $20 billion and was a major source of stabilisation funds during the 2008 global financial crisis, when oil prices fell rapidly by more than $100/per barrel (bbl). During the crisis, the ECA was used to fill budget gaps and enabled Nigeria to get through the crisis without a significant accumulation of debt.

In contrast, during the Covid-19 pandemic, the ECA has been unable to provide budget stability due to insufficient resources. Prior to the pandemic, the ECA dwindled to an all-time low of just $72 million. In 2020, the pandemic caused a historic contraction in Nigeria’s gross domestic product (GDP) of 3.2% and an expansion of the budget deficit to 4.7% of GDP. In order to meet its fiscal needs during the pandemic, Nigeria was forced to turn to sources of external finance, including the International Monetary Fund (IMF) and multilateral lenders, due to a lack of funds in the ECA.

This study examines the sources of mismanagement and corruption of the ECA that led it from being an effective economic stabilisation tool during the 2008 global financial crisis to being rated one of the most poorly governed sovereign wealth funds within little more than a decade. The study focuses on three primary sources of corruption: (1) alteration of the ECA’s annual savings level by the legislature; (2) under-contributions to the ECA by the Nigerian National Petroleum Corporation (NNPC) and its subsidiaries; and (3) unapproved and indiscriminate withdrawals from the ECA.

Our analysis estimates that nearly $70 billion in funds were not transferred to the ECA due to the legislature lowering the benchmark price and the NNPC failing to transfer funds. Our analysis also examines improper withdrawals from the ECA. Based on available data on contributions and withdrawals, there was an estimated net transfer of -$3.5 billion to the ECA between 2005 and 2015. The data shows that the ECA experienced substantial and consistent withdrawals at times when the economic environment was strong (2005–2006 and 2011–2014) and when it was weak (2008–2010). In fact, withdrawals peaked in 2011 – the same year that Nigeria recorded its highest oil revenues. Major sources of ECA withdrawals include current-year expenditures, fuel subsidies, debt financing, and power projects – all of which are outside the fund’s mandate.

Entities like the ECA and state-owned enterprises like the NNPC are part of an extensive network of patronage that goes beyond the control of formal institutional structures. This makes insulating the ECA from political interference an ambitious, if not impossible task. It is clear that the distortions in the way that ECA funds are managed cannot be addressed just by increasing transparency and accountability via ‘big bang’ reforms, as these will be opposed by those in positions of power.

We therefore recommend that a share of funds allocated to the ECA be redirected to the sovereign wealth funds managed by the Nigeria Sovereign Investment Authority (NSIA). The NSIA funds have relatively more efficient administration and lower levels of distortion. The organisation is able to achieve this because it has both a constitutional mandate to generate earnings (and therefore incentive) and ability to ensure this. It is an external-facing institution that is forced to manage its reputation as a credible investment fund in a highly competitive international market. Its international portfolio already provides it with some protection against capture.

Also, a substantial portion of the fund is invested in domestic projects via the Nigeria Infrastructure Fund (NIF), which is subject to monitoring by those with an interest in mobilising political support. The NIF is already investing in fertiliser programmes, healthcare and infrastructure investments that are targeting broad and disparate communities. Moving funds from the ECA to the NSIA could help National Assembly members deliver public goods to their constituents in more redistributive ways that benefit the country’s development. This does not mean that the political motives for keeping the ECA functioning will disappear, but creating competing incentives by expanding the role of the NSIA can help reduce leakage. Concerns of expending oil revenues on potentially populist projects will be valid. However, if the NSIA employs a portfolio approach towards project selection, the risks of extensive wastage can be effectively mitigated.