Networks, incentives and informal payments in the Tanzanian health system: a qualitative study 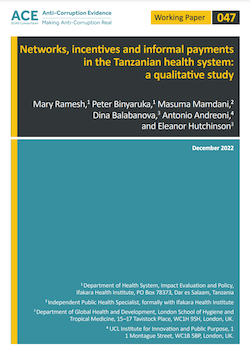 Our research shows that informal payments continue to be commonplace in hospitals and larger urban health centres in the following departments: maternity and labour wards, outpatient departments, surgery, and in the mortuary. In maternity departments, such payments appear to be made to an individual nurse by the patient or the patient’s family, especially when managers are not on duty (overnight or early in the morning). Informal payments are made in these instances to ensure good, attentive care for the inpatient. Similarly, in the mortuary, payments seem to be made to individual mortuary staff by the family of the deceased. In contrast, payments made in surgical departments and the outpatients department were described as being organised within networks of actors. In surgical departments, informal payments are made to speed up procedures (especially to move patients up the waiting list), organised by large networks of junior and senior staff working together. The large number of staff involved in these networks means that payments are often high, as they have to be distributed among all involved. They appear least amenable to a transparency and accountability strategy as so many staff benefit from these networks, and it is rarely within their interests to be a whistle-blower. Networks of staff members also manage informal payments in the outpatients department but here, the networks appear smaller, sometimes just two people – often the medical attendant who was in charge of triaging patients and organising patient records and notes, and the doctor or medical officers on duty.

In the surgical department and outpatients department, anti-corruption strategies have to understand corruption as a collective action problem, and seek ways of disrupting the networks that extract payments from patients. This could include changes to the shift pattern, so that staff no longer have the opportunity to develop these networks. In the maternity and labour wards, interviewees suggested that any strategy would have to include more supervision and managerial oversight.