Why train workers if they don’t get jobs? 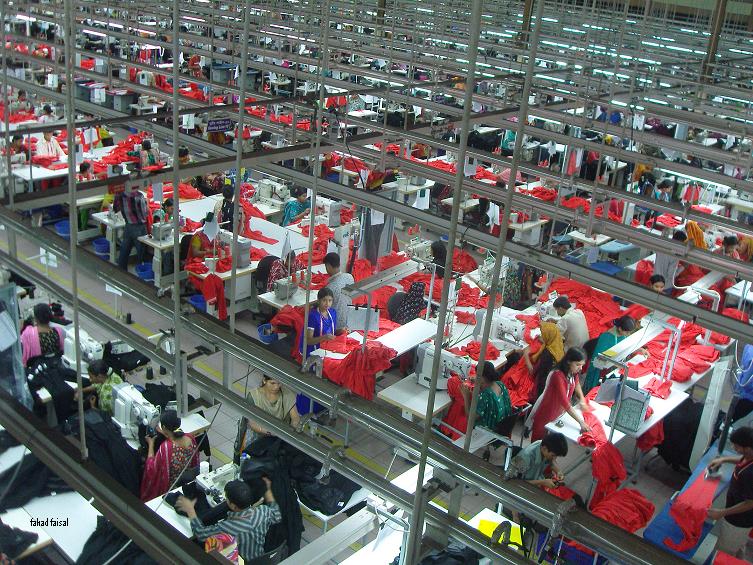 This article was written by Mehnaz Rabbani, Programme Lead, Research, Policy and Governance, and Shamael Ahmed, Research Associate. Both authors are working at the BRAC Institute for Governance and Development (BIGD), a partner of SOAS-ACE.

The article was originally published in the Dhaka Tribune on 16 May 2020.

Evidence on why skills programs resort to fraud

According to the World Bank (2018), Bangladesh, a country of 161 million as of 2016, has a labour force of 68 million. As our population is continuously increasing, over the years, the size of our labour force is also steadily increasing.

A report published by Mckinsey (2011) on Bangladesh’s ready-made garments (RMG) explained that one of the major challenges for the RMG industry is the shortage of skilled workers. Several other research studies on labour force and skills raise similar concerns.

There remains a visible gap between the skills required by the market and the skills available in the labour force. This is not only a problem for the employers, but also for the job seekers, because the lack of proper skills acts as a strong barrier towards getting jobs. This also negatively affects our economic growth and, especially, poverty reduction.

Hence, to address this rising problem, Bangladesh started to expand its technical and vocational education and training (TVET) programs (Asian Development Bank Brief, 2016). Over the years the enrolment in these programs gradually ascended; for example, in formal TVET programs, enrolment rose from only 110,000 in 2000 to 690,000 by 2014 (BANBEIS).

Currently, there are several such training programs with hundreds of millions of dollars invested to create skilled employable workforce. However, are the firms utilizing this cherished “skilled workers” developed by these programs?

The research study Better jobs: A strategy to end fraud in skills training in Bangladesh published by SOAS University talks about such a concern. The research suggests that the problem is two-fold — lack of skills and lack of organizational capacity to utilize skills. Focusing on a few major training programs, the authors show that it is unreasonable to expect that all trainees will get jobs after graduation.

A global comparison made by Clark and Wolcott (2012) was used in the paper to explain a significant difference in productivity among the firms producing the same products with the same machinery and similar human capital.

Cotton spinning output per worker in an hour in the United States was 7.4 times higher than in India. The SOAS research reasons this by stating that US factories are better organized than the Indian factories. It is because frequent stoppages created by poor organizational management — machine breakages, lack of spare parts, missing raw materials and so on — act as barriers and slow the production line.

This remains beyond the control of the individual workers, hence efficient and skilled workers are under-utilized by lower capacity firms. Interviews with different Bangladeshi garments firms portrayed the same paradox of willingness to hire skilled workers only when the firms have good organizational management.

This phenomenon was portrayed in a graph in the paper. 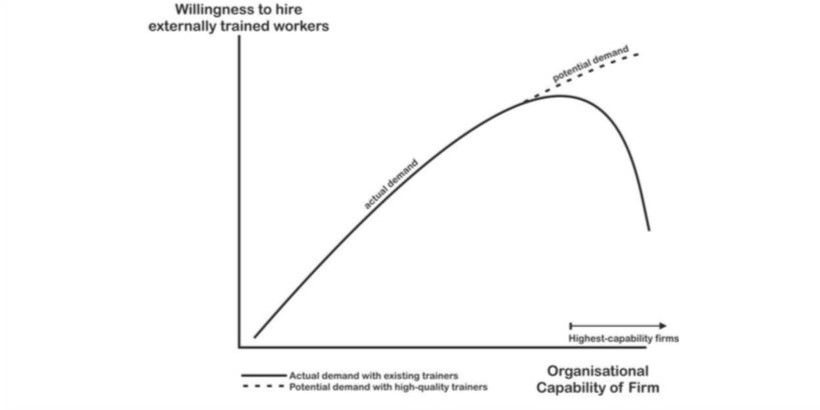 This nonlinear relationship between skills and productivity is what drives the failure of training programs to ensure employment for their trainees. However donor funded training programs have to report on how many of their graduates are employed to show success and secure funding. This creates incentives to misreport their success.

The paper studied two large scale skills programs in Bangladesh to gather evidence, which worked with individual budgets of around $1,070 million and 23 million for nearly 1.5 million and 100,000 workers respectively.

Using an innovative method to track misreporting, the research finds that training programs in the vicinity of RMG factories with high capacity are less likely to lie about how many of their trainees get jobs. Those operating in areas with low capacity factories resort to misreporting, ie lying about graduate employment.

This strategy is likely to contribute to effective development and utilization of skills and lowering of incentives for skills training programs to resort to fraud and misreporting to survive.