The 5th Biennial African Health Economics and Policy Association (AfHEA) Scientific Conference gathered in Accra, Ghana, between 11th – 14th March, 2019.  In a report by the International Health Economists Association (IHEA), it was noted that it was the biggest gathering of health economists in Africa since the founding of AfHEA 10 years ago, with close to 400 participants in attendance. SOAS-ACE was represented at the conference by colleagues from the University of Nigeria Nsukka, Charles Orjiakor, Prince Agwu, Pamela Ogbozor, Aloysius Odii and Obinna Onwujekwe. Here’s what they had to say. 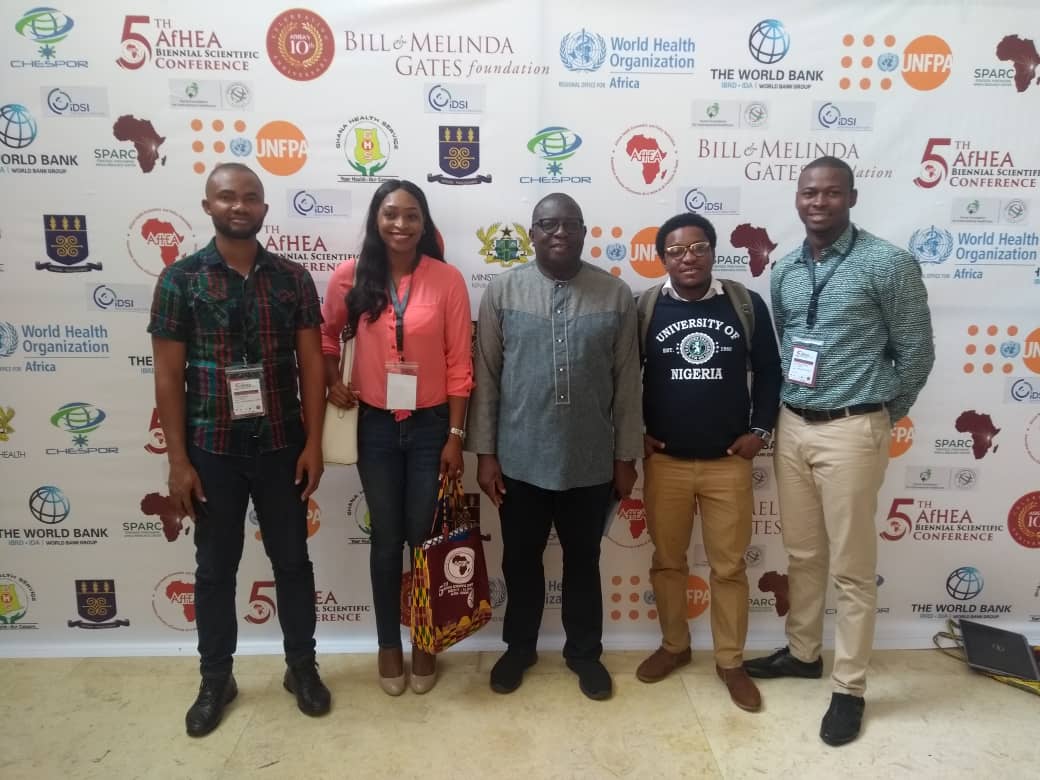 Charles. T. Orjiakor presented research findings from a systematic literature review that showcased the different forms and causes of corruption reported in studies that have focused on the health sector in Nigeria. Findings from the review identified different kinds of corruption plaguing Nigeria’s health sector including: absenteeism, informal payments, theft/diversion of money or medical supplies, and sharp practices in procuring medical supplies. These types of corruption are driven by low wages, poor infrastructure, weak accountability systems and insufficient information among service users and staff. Charles drew on findings from the Nominal Group Technique (NGT) – a research technique that helps to systematically build consensus among a target group. Invited stakeholders from the Nigerian health sector including frontline health workers, health managers and policy makers in Nigeria involved in a NGT workshop that identified 49 different types of corruption as being commonplace. From the 49 corrupt practices, 5 corrupt practices were top ranking as the most often occurring and easily addressable – absenteeism, informal payments, employment-related corruption, health financing related corruption and procurement-related corruption, respectively. Finally, he reflected the horizontal approach championed by the SOAS Anti-Corruption Evidence research consortium as a feasible approach to combat corruption issues in the health sector. The horizontal approach involves grass-root players and stakeholders who will benefit from tackling corruption, rather than waiting for government enforced top-down policies which have often achieved limited results.

Pamela. A. Ogbozor showed that all levels of healthcare system (primary, secondary and tertiary) suffered from absenteeism, but that it was most severe in Primary Health Centres and in rural areas. Junior staff were generally perceived to be less absent from work than doctors and senior health workers, and this is because they are often less able to have acquired resources to engage in other activities outside the facility, and they are better supervised and required to comply to rules.  Key drivers of absenteeism among frontline health workers include: political influences in recruitment and deployment, workplace conflict, political protection of health workers from sanctions, lack of social amenities and security, dual practice and work overload.

Cover-ups among health workers and shift patterns of work are used to cope with absenteeism. However, junior staff covering up for a senior worker may be performing duties beyond his or her capacity or qualification, thereby reducing the quality of care and putting lives of service users on the line. Among the past/existing interventions for absenteeism, biometrics and SERVICOM were found to be ineffective due to structural flaws. The need to strengthen checking attendance mechanisms of healthcare staff, refusal of local government health administrators deploying health workers to areas where they enjoy tribal protection, involvement of local health committees at the community to ensure health workers comply to rules, and improvement of welfare of healthcare staff, can serve as some horizontal anti-corruption measures to curb absenteeism of frontline health workers.

Prince. C. Agwu demonstrated that absenteeism of health workers at the PHC level could explain Nigeria’s poor UHC indices. He reminded participants that the 2030 benchmarked UHC is barely 11 years away, and the goal is to make sure that everyone gets access to quality healthcare, and at no financial risk. Sub-Saharan African countries, including Nigeria, currently rank low in UHC index, and absenteeism of health workers in most low and middle income countries is at about 45% rate. The connection of this issue to Nigeria’s poor UHC indices manifests through the following:

On remedies, horizontal efforts to curb absenteeism include: The use of Health Facility Committees and paramount rulers to offer community-based monitoring on PHCs, educating OICs and local government health administrators about donor bodies ready to help them with their infrastructure challenges, and regular monitoring of health workers by local government health administrators who should also sanction erring health personnel. Vertical interventions generated include: improved pay for PHC health workers, as well as paying them an amount that is at par with their colleagues at higher facilities; digitalizing attendance checking mechanisms at facility level, and improving working conditions. Thus, there is need to scale up the pace towards UHC in Nigeria, especially given the high burden of poverty bedevilling the country.

Lastly, Aloysius Odii discussed how politicking with healthcare slows down the attainment of UHC. Primary Health Centres (PHCs) have been recognized as the epi-centre of the efforts to achieve UHC, which in turn is crucial in the attainment of Sustainable Development Goals (SDGs) of 2030. He noted that most discussion on barriers to attaining UHC have been centred on the financial model, but there is a need to begin considering the effects of politics, since, the health sector, like every other sector, is highly political. The aim was to reveal disruptive actions of powerful and influential people that affect health care delivery at the PHC level. Findings presented show an overwhelming interference of powerful and influential persons in three critical areas in PHCs. First is in siting of PHCs, encompassing how powerful persons and groups influence where PHCs are situated, regardless of whether they are accessible to users. Second, in employment, they influence who gets the job, thereby, leading to the recruitment of unqualified persons. Finally, they protect health workers from disciplinary action, thereby, increasing friction between senior and junior health workers. Based on these, the recommendation follows that understanding better the synergy between local government, state government and community stakeholders, such as health facility committees, on decisions affecting PHCs, could help manage the political operations that negatively affect PHCs, thereby improving Nigeria’s chances of achieving UHC in the long-run.