The political economy of the steel sector in Tanzania: power relations and patterns of decline and growth over time 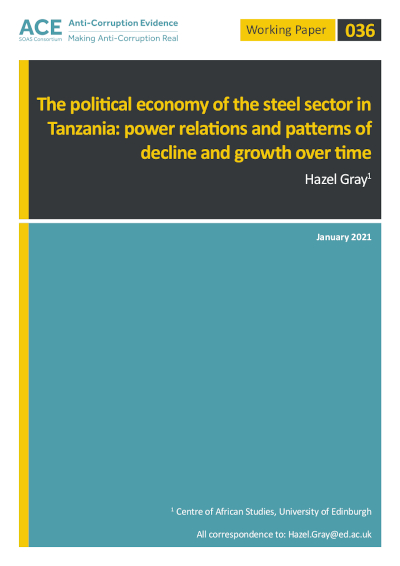 The trajectory of Tanzania’s steel sector over the past 20 years has been driven by expansion in the construction sector and building projects related to increased investment in mining, urban housing and large and small infrastructure projects. Reinforced steel bars and steel roofing sheets are the most prominent product categories, which are manufactured by a handful of dominant companies. As domestic production has not kept up with demand, imports have increased sharply since the mid-2000s.

While the Government of Tanzania has held long-term ambitions to mine iron ore deposits in the Southern Highlands, there is no primary steel production in the country. Instead, the steel value chain starts with either imported steel billets or scrap steel converted into ingots, which are transformed into a range of long and flat steel products. The sector consists of a few large industrialists involved in steel roofing and reinforced bars, plus many smaller producers that make a range of steel inputs for the construction sector. Traders and wholesalers also play a key role in the value chain along with construction companies who depend on steel.

This paper provides a broad analysis of the political economy of the steel industry in Tanzania, from the country’s independence in 1962 to the present day. It draws on secondary data and sources to trace the evolution of firm relations over time, and explains how a pattern of relationships forged between industrialists and the state from independence onwards have underpinned the political settlement. While the sector declined in the 1980s and moved to privatisation, it started to grow again in the context of increasing domestic demand as the rate of accumulation picked up at the end of the 1990s. During the 2000s, the sector expanded but remained highly concentrated and there were emerging signs of collusion between industrialists and the state. From the end of the 2010s Chinese investment in the sector expanded and changes occurred under President Magafuli in the way that rents were managed in the sector. The paper discusses the challenges in designing industrial policy to support domestic steel production in countries with small and peripheral industrial sectors.