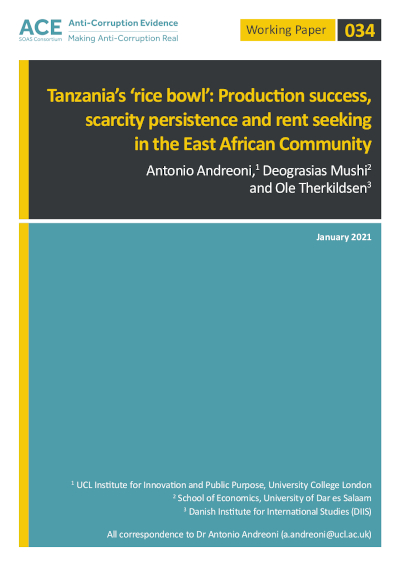 Rice is a ‘political crop’. As the second most important staple crop after maize in people’s diets in sub-Saharan Africa (SSA), rice attracts considerable domestic political attention. Furthermore, there is evidence to suggest that rice prices and availability can result in (dis)satisfaction with the ruling elite, perhaps influence election results, sometimes cause street protests and encourage rent-seeking. Although urbanisation and the higher incomes and changing tastes that come with it mean that demand for rice can grow rapidly, domestic production typically lags behind.

Rice scarcity – that is, the difference between domestic supplies and national consumption requirements – has grown in most SSA countries since the early 2000s. As a result, trade in rice has become the target of political micro-management and food security-related measures (e.g., differentiated import duties, exemptions and export bans). This has happened at both the national and regional levels, and in many cases at their policy intersection, as within the East African Community (EAC). Such policies are often vulnerable to corruption, however, because they allocate various forms of rents (e.g., through import licensing) and create rents opportunities due to policy-induced price differences across countries. Indeed, for political crops like rice and sugar, the major sources of corruption typically stem from rents that are intrinsically linked to scarcity. This is what we define and theorize as the ‘political logic of scarcity’.

Across SSA, Tanzania presents a puzzling exception. Rice growers, who are mainly smallholders, have quadrupled production since 2000 and have increasingly kept up with growing consumption. Since 2014, the country has become largely self-sufficient. Given this production success, scarcity-related rent-seeking should have declined. But the evidence shows the contrary: rent-seeking persists in Tanzania’s rice sector, driven by scarcity within the EAC and the broader region. A regional perspective on rice production and trade is therefore important to understand the political economy of rent-seeking in the rice sector in East Africa. National rice markets are de facto intertwined.

Our analysis in this paper shows that rents from trade in rice have shifted from rent-seeking in the domestic market towards rent-seeking in Tanzania’s nearby export markets. The remarkable increase in rice production – mainly by smallholders – is an important driver of this shift. Another is the decentralised and fairly competitive rice value chain, which provides incentives for rice-growers despite the dominance of large traders in parts of the chain. A third driver is that much of the rice smuggled into Tanzania (often through Zanzibar) is not consumed there but instead is exported to neighbouring countries – especially Kenya – where the shortage of rice is substantial and price levels are higher than in Tanzania.

Based on these insights we propose an anti-corruption strategy that largely harmonises rice import tariffs across EAC member countries.