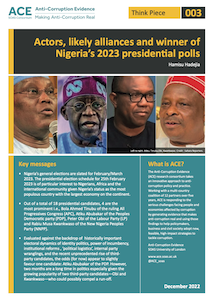 Voters in Africa’s biggest democracy, Nigeria, are preparing to go to the polls at the end of February 2023. They will elect governors, state and federal legislators and the president to lead Africa’s largest economy after the tenure of the incumbent president, Muhammadu Buhari, ends on 29 May 2023. Mr Buhari, of the All Progressives Congress (APC), came to power on a wave of populist support with the triple promises to fix Nigeria’s economy, address insecurity, and ‘kill corruption before corruption kills Nigeria’. The extent of the success or failure of President Buhari and the ruling APC in fulfilling these promises remains for Nigerians to assess.

Out of a total of 18 presidential candidates, 4 are the most prominent i.e., Bola Ahmed Tinubu of the ruling All Progressives Congress (APC), Atiku Abubakar of the Peoples Democratic party (PDP), Peter Obi of the Labour Party (LP) and Rabiu Musa Kwankwaso of the New Nigeria Peoples Party (NNPP).

Evaluated against the backdrop of historically important electoral dynamics of identity politics, power of incumbency, institutional reforms , ‘political logistics’, internal party wranglings, and the recent unprecedented rise of third-party candidates, the odds (for now) appear to slightly favour one candidate: Atiku Abubakar of the PDP. However, two months are a long time in politics especially given the growing popularity of two third-party candidates—Obi and Kwankwaso—who could possibly compel a run-off.