Absenteeism among doctors in the Bangladesh health system: What are the structural drivers? 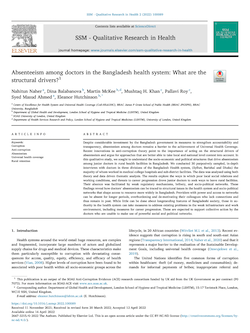 Despite considerable investment by the Bangladesh government in measures to strengthen accountability and transparency, absenteeism among doctors remains a barrier to the achievement of Universal Health Coverage. Recent innovations in anti-corruption theory point to the importance of acting on the structural drivers of absenteeism and argue for approaches that are better able to take local and national level context into account. In this qualitative study, we sought to understand the socio-economic and political structures that drive absenteeism among junior doctors in rural health facilities in Bangladesh. We conducted 30 purposively sampled, in-depth interviews with doctors in three divisions of the Bangladesh Health system, (Sylhet, Barishal and Dhaka) the majority of whom worked in medical college hospitals and sub-district facilities. The data was analysed using both theory and data driven thematic analysis. The results explore the ways in which poor local social relations and working conditions, and threats to career progression drove junior doctors to seek ways to leave rural facilities. Their absence was facilitated by weak regulatory mechanisms, bribery, and socio-political networks. These findings reveal how doctors’ absenteeism can be traced to structural issues in the health system and socio-political networks that shape access to resource more widely in Bangladesh. Providers with power and access to networks can be absent for longer periods, overburdening and de-motivating their colleagues who lack connections and thus remain in post. While little can be done about longstanding features of Bangladeshi society, those in authority in the health system can take measures to address existing problems in the weak infrastructure and work environment, including measures for career progression. These are expected to support collective action by the doctors who are unable to make use of powerful social and political networks.